A few minutes ago an old Navy buddy of mine sent me this picture with a message that just said “memories”. 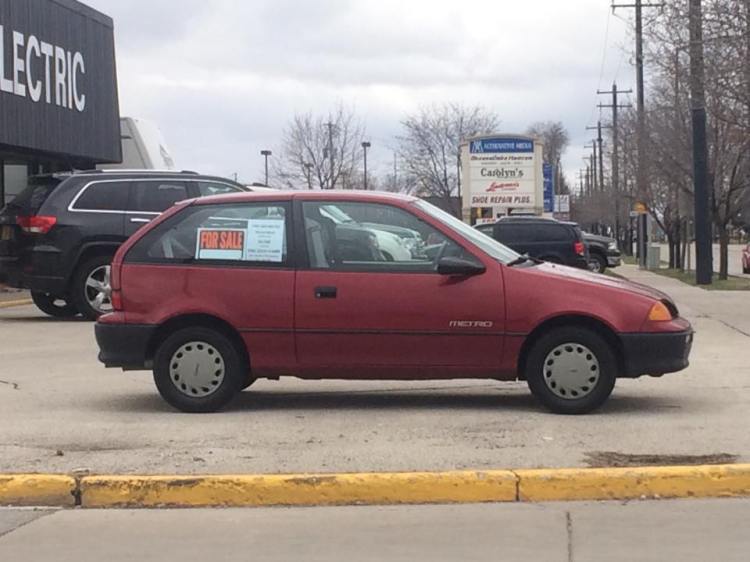 He remembers something I’d sorta like to forget. This is a picture of my first car. I’m sure it’s not the same one, but the color and everything are the same.

One of the many lessons my father and grandfather taught me was to always invest in good tools. A crappy drill will fail you in the middle of a project and a bad screwdriver can strip the head off of a screw of a critical part in a flash.

It should have come as no surprise to me then at 18 years old when I bought a crappy tool to use as my primary transportation. The 1992 Geo Metro was, even with it’s 60 miles to a gallon of gas… a complete piece of junk. I bought it from a dealer who repossessed it with 4000 miles on it (imagine having your Geo repossessed!!!). Seemed like a steal.

My father, a very very patient leader of his hard headed teenagers, tried to get me to buy a turbo charged Volkswagen Jetta Diesel. Had I followed his advice, that Jetta was the kind of car where the interior would have rotted away before the engine gave out and I would have probably had it for many years.

I wanted to make my own decisions and my father wanted to let me. He CO-SIGNED for the loan on a piece of crap. In the 3 years I owned it the engine was rebuilt TWICE! Once when my Dad was driving it the distributor cap just fell off, fasteners and all. When I went to trade it in to buy a Jeep in 1996 the used car dealer didn’t even want it.

I did eventually learn my father’s “only good tools” lessons and my toolbox is full of only Craftsman and Snap-On tools.

That’s the only kind of tools I buy any more.